Recently, our Roku 2 XD has become prone to lockups. My guess is that one or both of the two channels I mostly use has some sort of memory leak issue or something. I have no recourse other than complaining to the channels providers or to Roku. Don't think either option is likely to get much traction.  The only solution that seemed to work was cycling the power to the unit which has two drawbacks... One, it takes a long time to boot up a roku compared to the startup on say a table lamp; and Two, you have to get up from your comfortable couch and perform the needless ritual of pulling the plug and reconnecting it. I was googling for "rebooting roku" the other day after one of these episodes and found this post on a roku forum in reddit:

I resolved to try it out ASAP and to my amazement and delight I found that the spell worked from the actual Roku remote control. I set about creating a macro in my OpenRemote designer account for just that key sequence. I inserted a 200 milli delay between each key press. I named the macro roku-soft-reboot and put a button for it on the roku controller page of my UI. I resynced my controller app to the designer and reloaded my web page for my system. Drum roll... now I have functional soft reboot of my Roku from the couch. This gets me past the latter of the two drawbacks I mentioned above. It remains to be seen whether this will actually work under real lockup conditions since I don't know how to trigger these events on demand. I will follow up if it works or not once I get a lockup in the wild. Oh hey, if you know how to make a Roku boot faster please let the world know!!!!!!!! 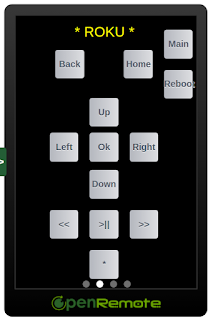 UPDATE: Now I've encountered several of these lockups on the Roku and it will not honor the macro during an actual lockup event :( But you can manually key the sequence and it does reboot. Maybe I need to tweak the delays between the key presses to see if I can get it to respond.