Posted photos of Glenda's folks on their find a grave memorials this AM.
Find them here:


And her baby sister too!

Click the photo tab to see the captions I placed on each picture.
Posted by Tim C at 12:08 PM No comments:

I've just completed install of EZA-3 contactless ignition system on my 1990 R100GS. It was considerably more complicated than I bargained for but is done now and I think the results will be satisfactory based on short test runs of the engine only. I won't be able to run the bike on the road for a while yet as the suspension reassembly is yet to be completed. I had two issues that complicated the install beyond what I originally planned for:

1) The system requires a 3 ohm coil like the /5 BMW series used.
2) The system will not clear the stock alternator cover (at least not on my particular bike).

My coil was the stock 1990 coil. I solved that issue by ordering and installing a DC1-1 Dynacoil from Euromotoelectrics with bracket. I had to drill and bend the bracket to work with existing mounting bolts and nuts for original equipment bosch coil bracket. I also spent a good deal of time crimping and soldering and heat shrinking insulation to hopefully allow reinstallation of stock system down the road if desired. All loose wiring is zip tied to give a reliable and hopefully safe install over time. I purchased some metal allen cap screws to replace the plastic screws provided in the EZA-3 kit. Plastic hardware doesn't hold much appeal to me! The biggest issue was the fact that after installation I did not have adequate clearance under the cover for the new hardware installed on the nose of the alternator assembly! This was very unexpected and I could not decide how to approach a work around. After fretting for a week or so about various bodges I had envisioned using, my son (licensed helicopter mechanic) suggested shimming the entire cover with a homemade shim underneath it. That was a brilliant idea and I immediately set about creating the shim. I found an old piece of laminate flooring plank in the garage of appropriate thickness (about 8mm). I drew the outline on the material and cut the outline. I then used a hole saw to create enough room to draw guidelines on the inner side adjacent to the vent channels. I went to work with various tools... coping saw, various drills, vibra-tool with sanding head etc. A couple of hours of fussy work later I had a custom shim. I painted it black with krylon to blend with the stock cover better and voila. I used some playdoh to check my installed clearance and it is just perfect. Photos below. No more silly flyweight mechanical advance. Looking forward to riding again soon! 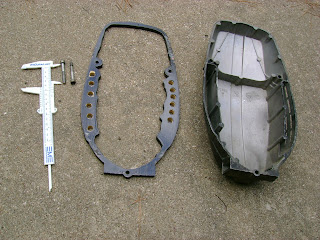 My new custom cover shim and longer cap screws needed to install cover now. I had these 45mm cap screws but they aren't quite long enough so I am going to get some 50mm for the final installation. 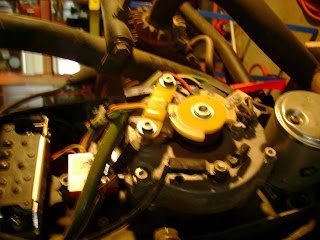 EZA-3 installed on nose of alternator all loose wiring neatly bundled and zip tied. EZA-3 module screws into former condenser mounting boss (/5 style ignition) above alternator. The old ignition can is a gutted unit but I could carry a spare and the original coil if I was going on a long ride for emergency repair. 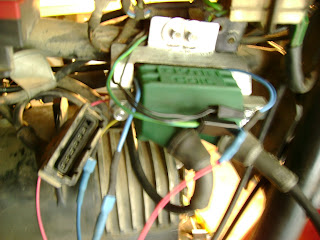 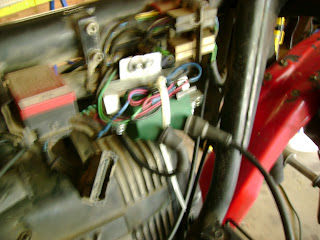